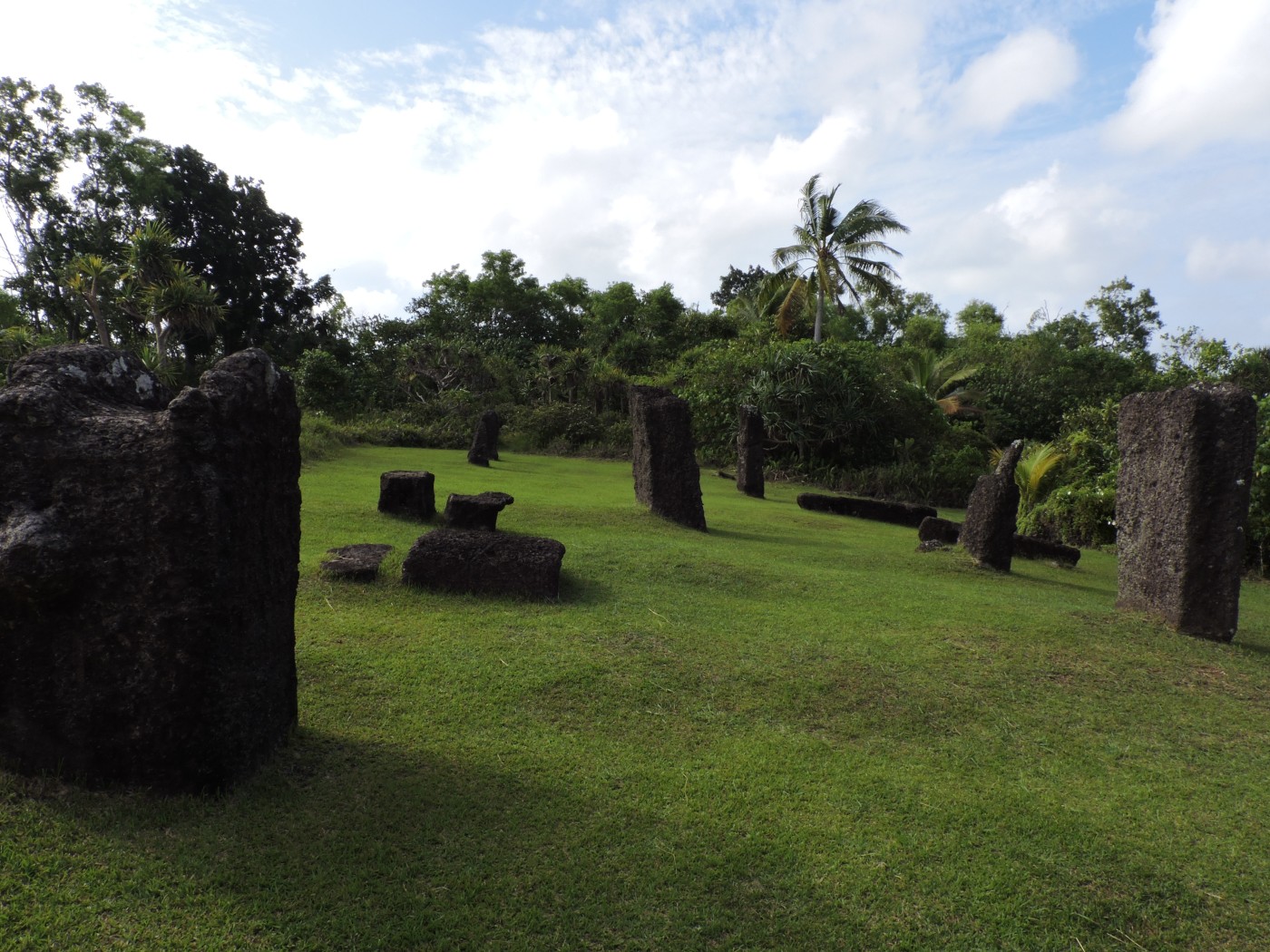 It’s been a busy week here in Palau, and we’ve been doing a lot of science and cultural immersion over these last few days. I’m in Palau as part of a 3-week research seminar on coral reefs, and you can see my first post about it here if you missed it. My research project is about tourism pressure on coral reefs, mainly in the form of physical damage to the reefs caused by snorkelers. My group has been hard at work this week visiting popular snorkel sites and sampling for evidence of physical damage to corals. Our sampling method involves something called a quadrat, which looks like this: 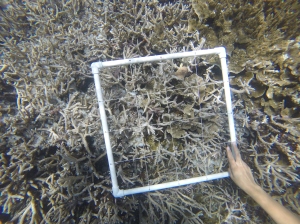 A quadrat is an easy do-it-at-home scientific tool, as it is made from PVC pipe and string. Our quadrats are half meter by half meter, so four quadrats give us a total of a square meter of area. To use a quadrat, you simply throw the quadrat randomly in the reef area you want to sample, see where it lands, and just look at the area inside the quadrat square. It’s really important that throws are actually random, and if something cool isn’t inside your quadrat, you can’t include it. This ensures that you really are getting an accurate, unbiased sample of the reef, and the more samples the better. For our tourism project, we are looking for percent live coral cover, types of corals, and evidence of physical damage inside our quadrats. And we weren’t the only ones interested in our samples; here’s a photo of a red-breasted wrasse checking out our quadrat:

Even though I’ve been working hard in the field, I’ve also been having lots of fun exploring more of Palau’s underwater world. My favorite snorkeling day this week was a trip to Palau’s Southern Lagoon: a beautiful, diverse region of really unique habitats. We visited four snorkeling sites: Fantasy Island, which featured thick branching corals and lots of fish; Rose Garden, whose rose-like turbinaceous corals had died out in the 1997-8 bleaching event associated with El Niño but where we found some cute sea cucumbers; Clam City, where I saw the biggest clams I’ve ever seen in my life; and Milky Way, which had suspended sediment in the upper layer of water so that it appeared milky and cloudy, and soft white clay at the bottom that is believed to have healing powers. Here are some photos from this day:

While science is a main focus of our class, there is also a big cultural emphasis. Most of our cultural activities have taken place on Babeldaob, also known as Babelthuap, which is the largest island in Palau. It is to the north of Koror, as shown on this map:

Babeldaob is also very different from Koror socially and culturally. Koror, which is the commercial capital of Palau and is right in the middle of the Rock Islands, is pretty built up. The main street is full of restaurants, department stores, gas stations, and nightclubs, with side streets leading off into more residential or industrial areas. It’s actually pretty hard to find Palauan food in Koror – most of the restaurants are American or foreign – and overall it’s pretty commercialized. 75% of Palau’s population lives in Koror, and it’s the major port and shipping hub of the country. Babeldaob is completely different. It is mostly countryside, separated into 10 of Palau’s 16 states:

Since Babeldaob only has 30% of Palau’s total population, which is about 6,000 people, it is super spread out and has a very low population density. Each state has a main village where most of the people live, which often have only partially paved or no paved roads. People are a lot more connected to their natural environment in Babeldaob, but even here, the younger generations are losing touch with traditional practices.

Two days ago, all the women in our class went to Ngardmau, a state in Babeldaob, to learn about and participate in the traditional practice of taro farming. Taro is the traditional starch food of Palau, and only women work in the taro patch, while the men go fishing. But in recent years, the practice of taro farming has greatly decreased. Women find it easier to go to the store and buy rice than farm taro, which is really hard work. Tarita, a native Palauan who grew up taro farming, has started a project that is funded by the Global Environment Facility’s Small Grants Program to teach women and girls the skills of taro farming. This project enhances Palau’s food security in addition to reviving an integral cultural practice. You can read more about this project here.

Ngardmau only has 200 people in it (around 50 households), and so we went taro farming with an estimated 15% of the state’s population. It was so cool to see women of all generations, from ages 5 to 65, all working in the taro patch together and teaching each other various skills. We learned how to clean a taro patch, which essentially involved hacking away at the grasses and weeds covering the taro plants with a very sharp knife, and how to plant taro, which you do by making a hole in the ground with a stick, putting ashes on the base of the plant to prevent disease, and securing the plant in the hole. There are over 80 varieties of taro in Palau, but the one we were planting takes 8 months to grow before the fruit is ready to harvest. Although many taro patches require you to be up to your knees in mud, the ones we tended were a different kind that only had up to one foot of mud. The following pictures show a more established taro patch that we visited later that day:

We’ve also spent some time exploring historical and archaeological sites around Babeldaob. Early on in the class, Ms. Sunny Ngirmang from the Bureau of Arts & Culture visited us and gave us an introduction to the anthropology and archaeology here. Palau has a rich human history, and pollen data indicates that humans may have settled in Palau as early as 4200 BC. However, there is no solid evidence before 3000 BC, for which archaeologists have found human bones dating back to that time. Babeldaob is composed of acidic rock, so most archaeological sites have been degraded, but there are still some that are in relatively good shape. One such site is the Stone Monoliths, which we visited:

We also visited a bai, which is a men’s meeting house. In Palau, only women are allowed to vote, and only men are allowed to hold positions of power in government. Palau has always been a matriarchal society, and although women are not allowed in a bai, they have their own meeting houses, which are often more ornamented. The bai we visited is no longer in use, and was part of a historical village in the state of Airai. Each village had ten clans, and the top four chiefs, representing the top four clans, sat in the four corners of the bai during meetings.

We also got to see a traditional Palauan canoe, which was beautifully decorated and hand carved from wood. Before Europeans arrived in the 1700s, Palau had no written language, and information was passed down through oral history. This canoe had a sea serpent painted on the side, and Palau’s oral history includes a story about the sea serpent. The canoe also represents the traditional Palauan view of marriage. The dugout canoe part represents the man, and the support beam represents the woman. Neither can float without the other, and together they make the full canoe.

We also saw a site from a much more recent period in Palau’s history: a Japanese communications center from World War II. Before and during the war, Japan occupied Palau and enslaved many of its citizens to mine aluminum in the hills of Babeldaob, which the Japanese used to build their Zeros. Before this period of Japanese occupation, there were 80,000 people living on Babeldaob, and this enslavement reduced their population drastically – today, only 6,000 people live there, and only 13,000 native Palauans live in the entire country. After WWII, Palau became a U.S. territory until they became an independent country under free association with the United States in 1994.

Palau is such an interesting place; culturally, socially, and environmentally. I wish I could spend three more weeks here just learning about the history and traditions of the Palauan people. According to Mr. Umiich Sengebau, Minister of Natural Resources, Environment, and Tourism, the #1 concern in Palau is retaining their culture. This is the lens that I will adopt in my next blog post, which will focus on conservation policy, politics, and tourism in Palau. For now, I’m enjoying my last week in this beautiful, intriguing place.