Skiing Sustainably, and Why It Matters

This week, I am home in Colorado for Spring Break, so I spent a couple days skiing in the mountains with my dad and sister. On Monday, we went to Monarch, a small local resort outside of Salida. Monarch is right in the middle of the Rockies, so there are mountains in every direction. On Tuesday, we went to Copper, which is a much bigger resort in Summit County. Copper also had fantastic views, as well as 4 inches of fresh powder. 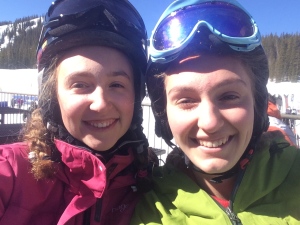 Monarch’s views completely astounded me – I really felt like I was on top of the world, since at the top of the mountain you can see for hundreds of miles. There is always a peaceful quiet on the ski slopes – the whistle of the wind, swaying of the evergreen branches, and gentle swoosh of skiers making their way down the mountain. At Monarch in particular, I really enjoyed feeling like even though I was surrounded by lift lines, lodges, and people, I was still experiencing the wildlife of the forest. Monarch Mountain is located in the San Isabel National Forest, and we caught a glimpse of a few birds and other critters that reminded us of our natural scenery. Here are some pictures I took at Monarch – my apologies for the photo quality, as it wasn’t going to be practical to bring my good camera on the slopes:

Although Copper is located in the White River National Forest, and also has plenty of wildlife, I got a different feeling when I was there. Copper has fewer broad views than Monarch, but it is surrounded by big, almost menacing peaks that reminded me of how high up we were. Colorado is known for its high altitude, and a scientific measure called the lapse rate indicates that with every additional 1,000 feet (or 300 meters) in altitude, the temperature drops by 3.5 °F (or 2 °C). So it made sense that we felt colder on Copper’s tallest peak, which is 12,313 feet above sea level, than on Monarch’s highest peak, which is 11,960 feet above sea level. Here are some pictures I took at Copper (you can click on each image to make it bigger):

All this skiing got me thinking about the sustainability of ski resorts. Like Copper and Monarch, many ski resorts in this country are located on national forest land, and are given permission to operate by the National Forest Service. In some cases, there are endangered and/or threatened species living in these areas, and conservation efforts must be balanced with the need to clear some land for slopes, maintain those slopes, and service all areas of the mountain. Ski resorts also take a TON of energy to power lodges, grooming machines, and shuttles, not to mention all the lifts, which are pictured below:

So how are ski resorts doing in terms of sustainability? I decided to do a little investigating, and found that two of the biggest initiatives are spearheaded by the National Ski Areas Association (NSAA) and the Ski Area Citizen’s Coalition (SACC). The NSAA created Sustainable Slopes, an Environmental Charter for the ski industry, in 2000. As of 2013, 190 resorts had signed the charter; you can view the list of resorts here. The NSAA also has several other sustainability programs, including the Climate Challenge and Sustainable Slopes Grant Program. The SACC releases a Ski Area Scorecard every year that ranks U.S. ski resorts according to environmental performance, which is measured by many different factors ranging from waste management to resource conservation to energy use. Here are the top 10 ski resorts (out of 84 total) listed on the SACC’s 2013-2014 Scorecard:

It does seem that there is a green trend in the ski industry, and most resorts are at least starting to think about sustainability and communicate about it to their customers. I was sipping some hot apple cider in one of the lodges at Copper when I noticed this poster on the wall: 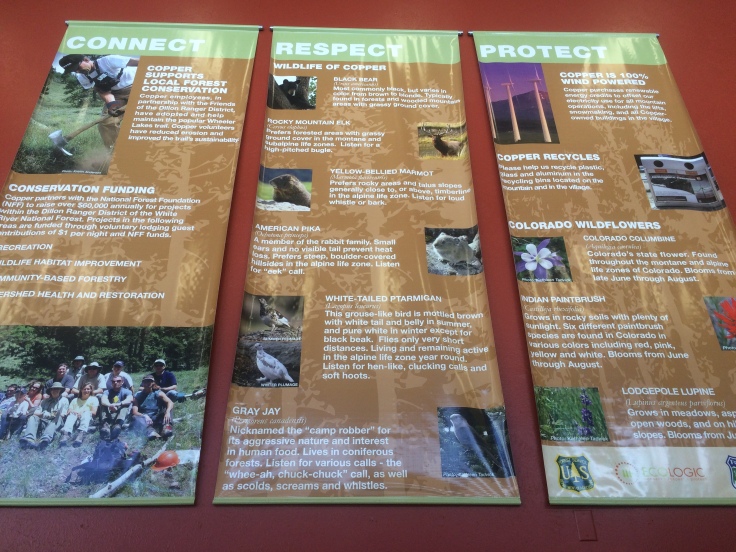 This poster details conservation and environmental efforts at Copper, and from the variety of wildlife pictured, it’s clear that it matters. The three main initiatives mentioned on this poster are conservation support, recycling, and powering operations with 100% wind energy. But there is a big caveat to the last initiative, so let’s take a closer look:

But perhaps the ski industry’s large carbon footprint isn’t all their fault. An opinion piece brought up the point that on average, 73% of a ski resort’s carbon footprint is comprised of all the emissions it takes to get people to the resort. So maybe most of the problem is in carbon-intensive modes of transportation rather than on-site operations. However, I think that both are important to managing sustainability of ski resorts. And increasing sustainability initiatives has big pay-offs for ski resorts, because as more carbon emissions are released into the atmosphere, it exacerbates climate change, which increases average global temperature, changes weather patterns, and heavily impacts natural snowfall. Ski areas are particularly in trouble because areas of high altitude are almost as sensitive to climate change as the poles. And as climate change decreases natural snowfall, it creates more need for artificial snow, which takes a lot of energy and water to make. Ultimately, climate change will shorten the winter ski season, decreasing revenue for ski resorts. This also makes it hard for resorts to budget and plan correctly, as most decisions about the number of employees, the opening date, and the closing date are made way in advance of the winter season. Climate change is changing the game for ski resorts, in ways that are rapid and hard to predict.

Don’t get me wrong; I love skiing, and I’ve been doing it since I was 7 years old. But it’s also clear to me that the ski industry must become more integrated in climate discussions if they are to continue to operate in a changing world. There are several organizations that are trying to bring the ski industry into this conversation – for example, in January, EPA Administrator Gina McCarthy visited the X Games in Aspen with the Protect our Winters campaign. This is just one example of a popular activity that is being threatened by climate change. But it’s also an example of how an industry with a large carbon footprint has the potential to make a positive change.