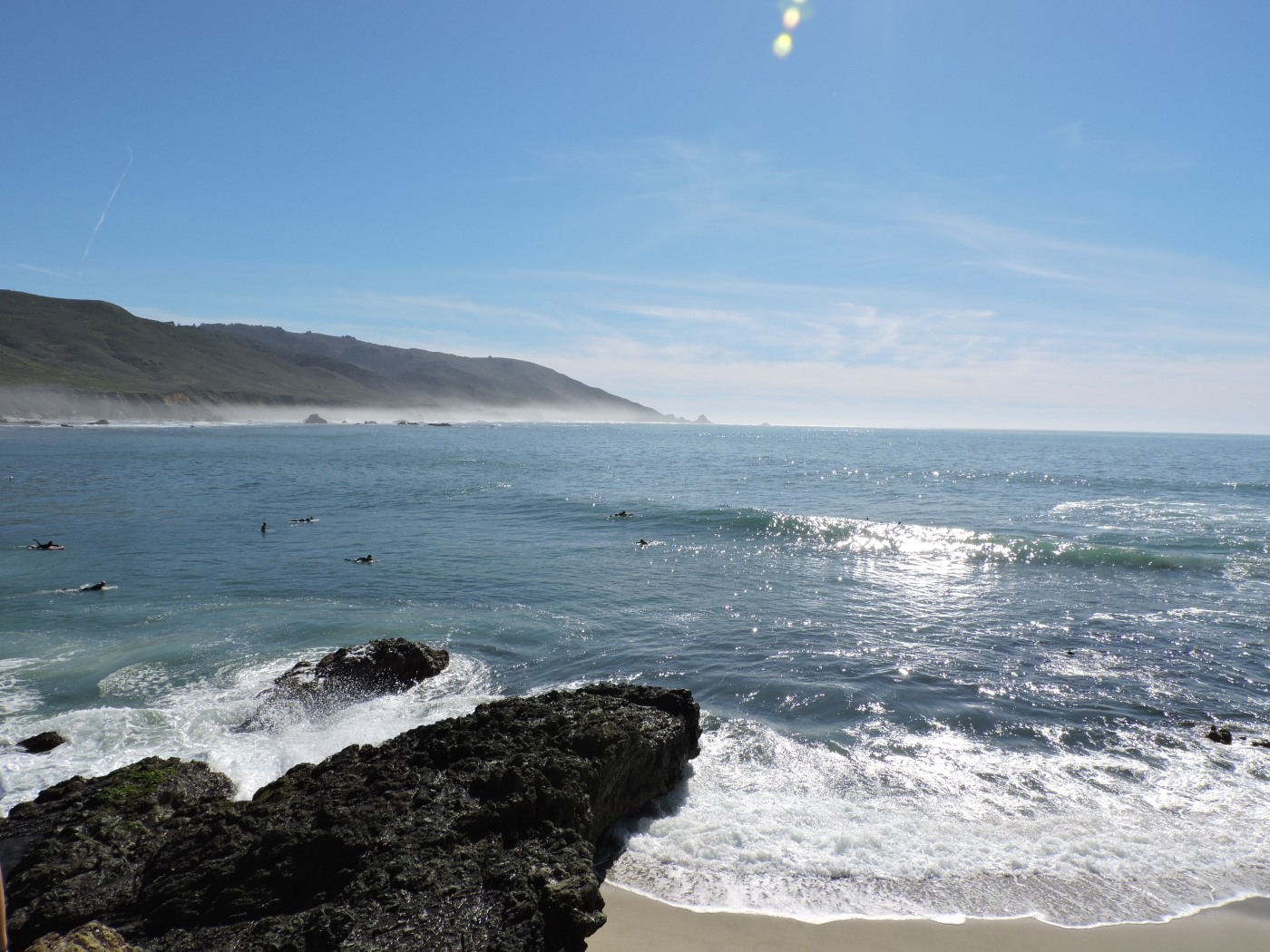 Two weeks ago, I went down to Big Sur for a camping trip, and stayed in Andrew Molera State Park. Big Sur is a 90-mile section of Highway 1 that stretches from Carmel down to San Simeon. The area features beautiful California coastline, famous views, and numerous state parks and national forests. In Big Sur, the Santa Lucia Mountains rise to 5,000 feet within two miles of the ocean – the most abrupt rise in elevation along the Pacific coast.

In the middle of the day, we hiked from our campsite to the nearby beach at Molera Point, and got to experience the beautiful sights and sounds of the beach on a beautiful sunny day. After hanging out on the beach, we hiked on top of Molera Point and saw some breathtaking views of the ocean. Here are some photos that I took:


As you can see, this is arguably some of the most beautiful coastline in the world. The California coast is so unique and varied, and I was curious about how it was originally formed. So I asked Richard Nevle, Deputy Director of Stanford’s Earth Systems Program, to teach me a few things about the geology of Big Sur. To understand the whole story, we have to go back to the theory of plate tectonics. About 300 million years ago, there was a supercontinent called Pangea. Over time (a long time, we’re talking about geologic scales here) Pangea broke up and moved into the seven continents we see today. To see how Pangea broke up over time, check out this video.

But how did Pangea break up? How did these land masses move far apart? The answer is called plate tectonics. The earth’s surface is called the “crust”, which rests on the mantle. In the Earth’s center there is an outer core and an inner core, getting increasingly hotter with depth. Here is a picture of a cross-section of the Earth:

The crust is made up of “plates”, which are kind of like the pieces of a giant puzzle. These plates move around and interact with each other at their boundaries, and that is how continents move. These plates move extremely slowly – the Pacific Plate, for example, moves about 1.5 inches per year in relation to the North American Plate. Richard Nevle lent me a book called The Natural History of Big Sur in which the authors Paul Hension and Donald J. Usner compare this to the rate of growth of a fingernail. I hope to live to 100, so in my lifetime, this plate will move a grand total of 12.5 feet. That’s geologic time for you. Here is an image of all the plate boundaries on Earth:

There are three different types of plate interactions: transform, divergent, and convergent boundaries. Transform boundaries happen when two plates slide past each other, like this:

A divergent boundary is one where two plates move away from each other, and new crust rises from beneath to fill the gap: 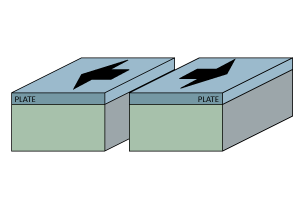 A convergent boundary is one in which two plates are moving towards each other. This type of boundary is a bit trickier, because there are actually three different outcomes that could happen. It all depends on the properties of the two plates that are coming together, and whether they are made up of oceanic or continental crust. Oceanic crust is denser than continental crust, so oceanic will want to go beneath continental crust. When one plate goes beneath the other, it is called “subduction”. Subduction zones often form mountains, islands, or trenches. Subduction creates volcanoes, since rising magma from the mantle is easily accessible at these plate boundaries. Let’s look at this picture of the three different possible outcomes: 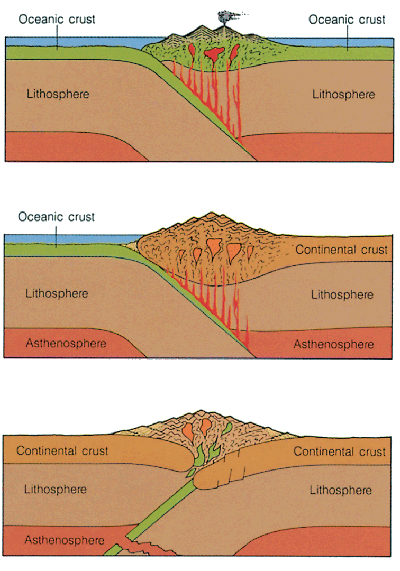 First let’s look at the first situation: oceanic crust meets oceanic crust. Since they are of the same type, the plate that ends up being denser goes underneath the other. In this case, islands, often with volcanoes, are formed. The Hawaiian islands, which are a hot spot for volcanic activity and associated ecosystems, were formed in this way.

Lastly, let’s look at the third situation: continental crust meets continental crust. These are of the same type, so whichever one ends up being more dense subducts beneath the other, and mountains are formed. When India collided with the continent of Asia in this fashion, it formed the Himalayas. If you watch the video about Pangea above, you can see India colliding with Asia and get a sense of the significance of this process.

Now that we understand the basics of plate tectonics, let’s come back to California. Our state lies right at the boundary between the North American plate and the Pacific Plate, often called the San Andreas Fault system. This is why there are so many earthquakes in this area (although in my year and a half of living here, I have managed to sleep through both of the earthquakes that have happened.) Big Sur is known for its varied coastline and the unique combination of rocks that make up its terrain. Specifically, while there are many sedimentary rocks that are typical in coastal areas, Big Sur also includes many metamorphic and igneous rocks, which are usually located near volcanoes, that are seemingly haphazardly mixed in with the sedimentary rocks. Where did these metamorphic and igneous rocks come from, if there are no volcanoes nearby?

The Natural History of Big Sur explains that there used to be an oceanic plate in between the Pacific and North American plates called the Farallon plate. Over 30 million years ago, the Farallon plate started to subduct underneath the North American plate (recall that oceanic crust is more dense than continental crust, so this makes sense.) This subduction ground up lots of oceanic rock that was essentially dumped onto the continental plate, creating some of the massive iconic rocks that define the California coast. As the Farallon plate continued to inch farther and farther underneath the North American plate, it was heated up by the Earth’s interior, which sparked volcanic eruptions inland. These volcanoes were the beginnings of the Sierra Nevada Mountains.

Eventually (like after a really, really, long time – over one million years later) the Farallon plate had fully subducted and the Pacific and North American plates were now touching. The boundary between these two plates then became a transform boundary. As these plates started to slide past each other, a piece of the Sierra Nevada (which contained lots of igneous and metamorphic rocks) was carried up the fault and deposited in Big Sur. That’s why we see this jumbled conglomeration of sedimentary, igneous, and metamorphic rocks along today’s Big Sur coastline.

Thinking about geology, and the enormous changes that have been happening for longer than there has even been life on this planet, much less human life, can sometimes make me feel small and insignificant. The following image describes a “clock” analogy in which the natural history of the Earth, starting from the formation of the Earth’s crust at 4.6 billion years ago, is scaled down to fit into one “hour”: 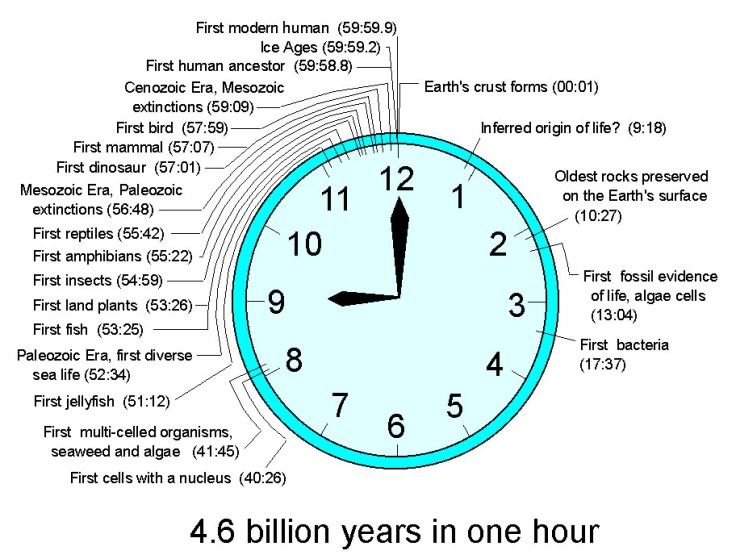 So in terms of geologic time, my lifespan isn’t even long enough to be reasonably measured. However, I think geology is really important to understand because it gives us perspective, and helps us think critically about our role on Earth. These huge forces have been going on Earth for millions, and in some cases billions, of years. All we are given is 100 years, if we’re really lucky. It’s up to us what we do with the short time that we have. What are you going to do with your century?

3 thoughts on “Conglomerate Coastline: The Geology of Big Sur”