The impacts of fossil fuels and greenhouse gases on our atmosphere and global temperature are widely publicized. And while these changes are crucial to understanding the science and translating it into policy, there are other impacts of climate change that are not talked about nearly enough. The one that I’d like to focus on in this post occurs in our oceans. Through a process called ocean acidification, the release of greenhouse gases, namely carbon dioxide, into the atmosphere is affecting the chemistry of our oceans.  I made the following visual in a workshop called the Visual Communication of Science, and it explains how the process of ocean acidification works. You can click on it to make it bigger: 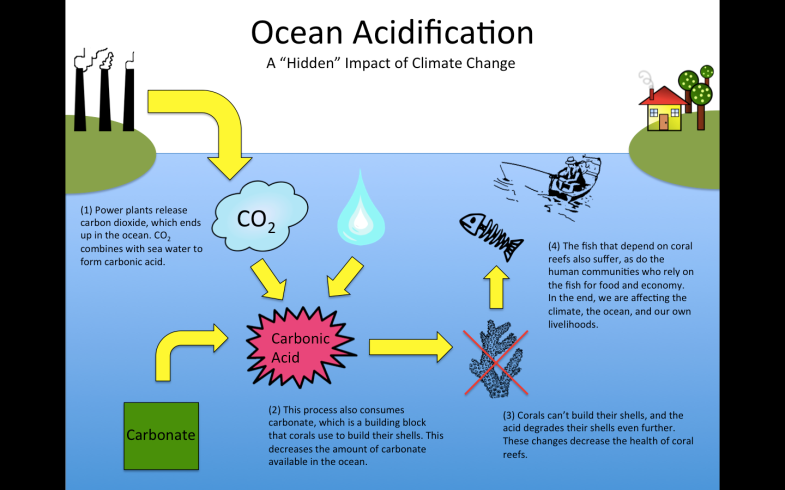 The release of carbon dioxide is not only decreasing the amount of carbonate, which is naturally found in the ocean; it is also fundamentally changing the nature of the ocean environment. When carbon dioxide and water combine to form carbonic acid, it decreases an indicator called pH, which is a numerical scale that indicates how acidic or basic something is. The pH of the ocean has decreased by 0.1 units since the start of the Industrial Revolution. That doesn’t sound like much, but based on the way the scale is set up, it actually indicates a 30% increase in acidity. Corals and many other marine creatures have a very narrow pH range in which they can survive. When corals are experiencing such significant changes in their environment, they have to spend more energy just trying to survive, and can spend less energy on doing other important things, like, you know, creating baby corals. The chemistry of the ocean is changing so quickly that many coral reefs simply can’t keep up with the changes. 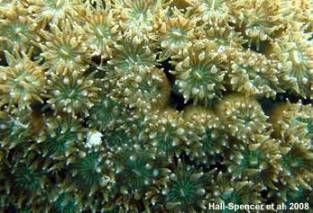 Another huge impact of climate change on corals is associated with increasing temperatures. A warming planet means a warming ocean, and remember the narrow range of pH tolerance that corals have? Well, that applies to temperature as well. In a previous post called Recent Redwood Reflections I called redwoods the “Goldilocks tree”, and corals are definitely the “Goldilocks” of the ocean. Their environment has to be just right, or else really bad things happen. Like this:

The above photo shows a phenomenon called “coral bleaching”, which is what happens when corals get too hot. And to understand how coral bleaching occurs, you have to understand a little bit about coral anatomy. Corals have a symbiotic relationship with an organism called zooxanthellae. Think of a symbiotic relationship as one in which both parties need something from the other in order to survive. Like peanut butter and jelly. Or me and my dog. Corals and zooxanthellae need each other to exchange nutrients and energy. To learn more about this relationship, click here. When it gets too hot, corals get very stressed and get rid of their zooxanthellae. Since zooxanthellae give corals their color, corals then turn white, which is called coral bleaching. Without zooxanthellae, corals cannot get the nutrients they need, and if bleaching occurs for a long period of time, it can result in coral death. To learn more about ocean acidification and coral bleaching, click here.

So why should we care?

For millenia, people have viewed the ocean as a mysterious, huge, insurmountable force, and there are still many that believe that the human species could not possibly be changing something as big as the ocean. But indeed, we are having an impact. Ocean acidification and coral bleaching may be “hidden” from view, based on our perspective living on the land, but the consequences of these processes is very clear and present. The effects are showing up everywhere: on fishing boats, through scuba divers’ masks, in grocery stores, and on our dinner tables. And if we don’t change our behavior, policy, and energy economy soon, our children and grandchildren may never be able to experience a healthy coral reef and the priceless benefits that come with it.

3 thoughts on “Ocean Acidification: A “Hidden” Impact of Climate Change”