I recently went on a hike with my good friend Meghan Shea to the Purisima Creek Redwoods Open Space. It was about a 35-minute drive away, and the fresh morning scent of the forest was exactly what I needed to recenter myself. When you’re living in the suburbs, it is so easy to forget about the incredible natural places that are just around the corner. Even though school keeps me insanely busy, one of my New Year’s Resolutions is to make more time for nature. The day I went on this hike was also Martin Luther King, Jr. Day, and it was a great place to reflect on this amazing man’s life, all that he did for our country, and the positive influence that he still has on our world today. There’s just something about nature that makes you feel like you’re a part of something bigger than yourself, and it helps you gain perspective. Here are some photos that I took on our hike – feel free to click on each photo to zoom in:


Redwoods, the world’s tallest trees, are a trademark of Northern California. In fact, the Pacific Coast is the only place in the world where coast redwoods (the same species I saw on my hike) grow. They play a huge role within their ecosystem, while at the same time benefitting human society. A paper by Heather Enloe and Robert Graham documents that when leaves fall off redwood trees, they often accumulate to form new soil, which brings together nutrients that can support communities of plants, fungi, insects, and small animals. The Hilltromper Santa Cruz website also notes that redwood trees store more carbon than any other tree on the planet, and help maintain a stable, healthy climate. However, when these trees are cut down, they no longer take up carbon and they release all of their previously stored carbon back into the atmosphere. That doesn’t sound like a smart idea. And yet, people have been chopping redwood trees down for centuries because they are very resistant to fire, insects, and rot, and are therefore very good for building things. Endangered animals like the mountain lion and Coho salmon also depend on the redwood forest, which supports healthy habitat, clean streams, and diverse communities.
I live in the Bay Area of California, where it usually only rains from November to March. In Santa Cruz, which is about an hour’s drive from Stanford, temperatures range from 54 to 76 °F in August, and from 41 to 62 °F in December. This area is also famous for its fog – as Mark Twain once said, “The coldest winter I ever spent was a summer in San Francisco”. Richard Nevle, Deputy Director of Stanford’s Earth Systems Program, told me that fog brings much needed moisture to redwood trees, which allows them to survive during the dry summers. According to a paper by T.E. Dawson, 34% of the water in coastal ecosystems comes from fog collected by redwood trees, but without trees, only 17% of the water comes from fog. Richard calls redwoods the “Goldilocks tree” because they are so well adapted to living in this area, which is not too hot, not too cold, not too wet, and not too dry. This characteristic allows redwoods to outcompete plants that are suited to only dry or only wet conditions. Like Goldilocks, who doesn’t settle for extremes but instead finds the bowl of porridge that is “just right”, redwood trees are very resourceful and make the most of their environment.
A tree that protects wildlife, provides nutrients and water to the community, and stores tons of carbon? That sounds like a great deal to me. But unfortunately, the range of the redwood forest is now much smaller than it once was (brown areas are the historic distribution of redwoods, and green dots are the current distribution): 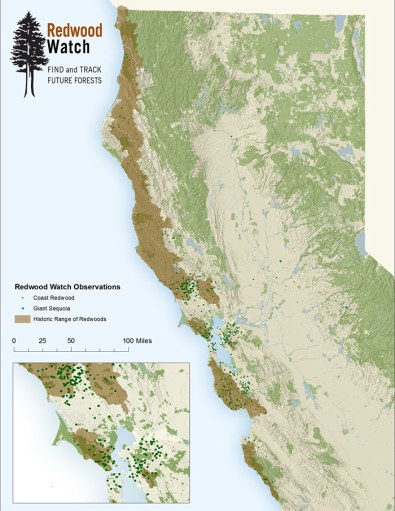 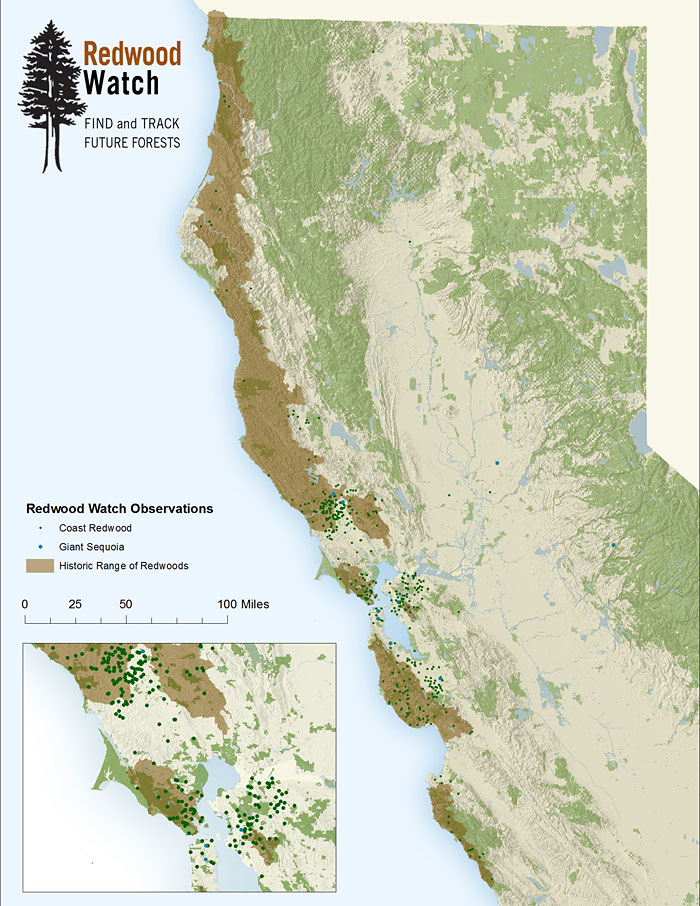 So far, we’ve talked about why redwood trees are important and how they are related to the climate of the Bay Area, but where does this fog come from in the first place? Let’s start with the California Current, which runs from North to South down California’s coast:

The California Current brings with it seasonal wind patterns that drive a process called upwelling along the coast. In the process of upwelling, surface water is pushed away from the coast, which allows cold, nutrient-rich water from the deep ocean to come up to the surface to fill this gap. This cold water “refrigerates” the air, forming the thick fog that characterizes the Bay Area and allows the redwood trees to grow and thrive. The nutrients that are brought up to the surface also fuel a rich marine environment, complete with kelp forests, elephant seals, and many other wonderful creatures. If you are interested in learning more about upwelling and other applications in which it interacts with climate, check out my research blog from last summer here. 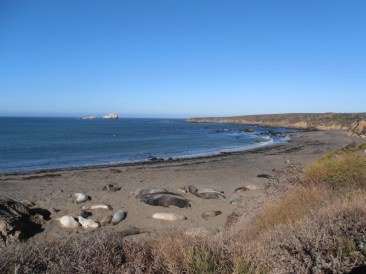 Elephant seals bask on the beach in Big Sur, California.

In his book My First Summer in the Sierra, John Muir said, “When we try to pick out anything by itself, we find it hitched to everything else in the Universe.” This is especially true in Northern California – the California current drives upwelling, which brings nutrients to elephant seals and kelp forests, but that also creates the fog that allows redwoods, which are vitally important to local ecosystems, to survive. This system is so interconnected that changing one element of it ever so slightly is going to affect everything else in that system.
That’s why it matters that the redwood forest is disappearing. For a long time, deforestation was the main culprit, but now there’s a new threat: climate change. Although we’re not sure exactly how the redwoods will be affected, we do know that there’s not much time to figure it out before we start seeing the impacts. The Save the Redwoods League mentions increasing temperatures and low water availability as two major reasons for concern. We are already seeing higher temperatures due to climate change, as NASA found 2014 to be the warmest year on record. Climate change is also increasing the frequency and intensity of extreme weather events like the current California drought, which will put even more water stress on the redwood trees. (For research relating the current drought to climate change, read this article). Redwoods may be the “Goldilocks” tree, but the environment has to be “just right”, within a narrow range of conditions, for the redwoods to survive. These conditions are changing faster than redwoods can adapt, and even faster than some individual redwoods have experienced in their lifetimes (since according to Hilltromper, the oldest living redwood is 2,200 years old). And if the redwoods can’t keep up with these changes, neither can the rest of the ecosystem.
I love being able to hop in the car and spend a few hours admiring these incredible trees, but I can never take them for granted. Too much is at stake for us to sit back while climate change jeopardizes the health of the redwoods. Because if we don’t do something soon, the ecology of the Bay Area may look very different in just a few decades.

*Thank you to Richard Nevle for explaining to me the connection between ocean circulation, Bay Area climate, and the health of the redwood forests.